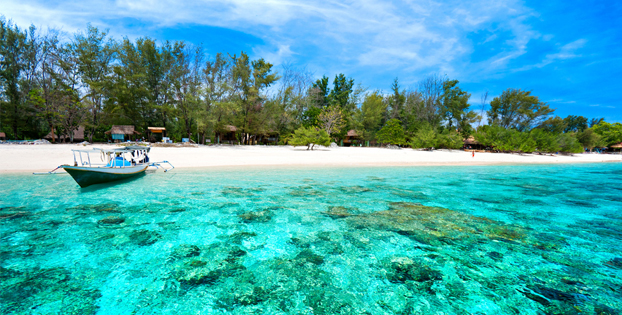 Gili Trawangan was the first of the three islands to attract visitors in any numbers, and it was backpackers who led the way. In the 1990 s the island developed a reputation as a wild party destination with cheap accommodation, no police, plentiful weed and mushrooms, and readily available harder drugs. Whilst that is still partially the case, Trawangan has matured into a destination that has a far wider appeal. The thriving dive industry of the Gili Islands is centered here (although some operators have outposts on the other two islands), and since about 2005, the island has gone through a massive development boom, and a number of upscale sleeping, eating and drinking establishments have opened.

Most of the accommodation and other facilities on the island are on the eastern side, sheltered from the winds and rough seas of the Lombok Strait which sometimes batter the opposite side of the island. Boats dock here as well, on the beach just north of the market. This generally means a walk in the shallow water to disembark. There is also a private concrete and wood jetty used by a few companies. A footpath circumvents the whole island and various tracks criss-cross, nearly always leading back to this coastal path. The area set back behind the east coast beachfront establishments is where most of the locals live (and where there is a lot of budget accommodation), and is known simply as “the village”. There is a low lying hill in the southern center of the island, which is easily reached from the tracks heading southwest from the back of the village.

How To Get Gili Trawangan

There are several ATM’s near the harbor support Visa and Mastercard. Some accommodations also have ATM on their place.