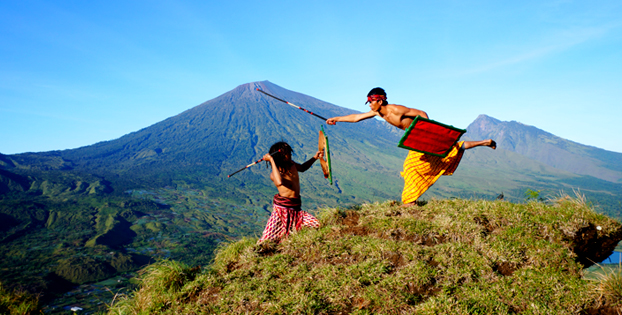 Lombok Island is one of the two main islands of province of West Nusa Tenggara(NTB), about halfway along the Indonesian archipelago. Sumbawa is the other main island of West Nusa Tenggara. Lombok Island  is dominated by one of the highest mountains in Indonesian, Gunung Rinjani, which soar to 3726 meters. A dormant volcano, Rinjani last erupted 1901. It has a large caldera with a crater lake, Segara Anak, 600 meters bellow the rim and new volcanic cone which has formed in the center. Districts Lombok is divided into four Kabupaten(districts): Lombok Barat(West Lombok), Lombok Timur (East Lombok), Lombok Tengah(Central Lombok) and Lombok Utara(North Lombok). Mataram is also the administrative capital of the west Nusa Tenggara Province.

In lombok’s dry season – from June to September-the heat can be scorching. At night particularly at higher elevations, the temperature can drop so much that a jumper(sweater) and light jacket are necessary. Wet season extends from October to may, with December and January the wettest months.

Apart from banana and coconut palms, which grow in profusion over most of Lombok, the forests are confined largely to the mountain regions where they are extensive and dense, tough logging is taking its toll. Teak and Mahogany are among the forest timbers. Other native trees include Bintangur, Kesambi, Bungur and fig, all of which are used widely for building houses. Several species of deer, including Barking Deer, as well as wild Pigs, porcupines, snakes, numerous kinds of lizards, frogs, turtles, long-tailed monkeys, civets and feral cattle are found here.

Lombok has a population 4,5 million(1998 cencus), the majority living in and around the main center of Ampenan, Cakaranegara, Mataram, Praya and Selong. Almost 90% of the people are Sasak, about 10% are Balinese and the minority population of Chinese, Javanese and Arabs.

Traditional law(adat) is still fundamental to the way of life on Lombok today, particularly customs relating to courting and marriage ritual, and circumcision ceremonies. In western lombok you can see Balinese dances, temple ceremonies, and colorful processions with decorative offerings of flower, fruits and food. Sasak ceremonies area often less visible though you may see colorful procession. Ask around and you can probably find when and where festivals and celebrations are being held.

How To Get Lombok Island

There are three options to reach Lombok Island, by Flight, by Fast Boats and by Public Ferry.