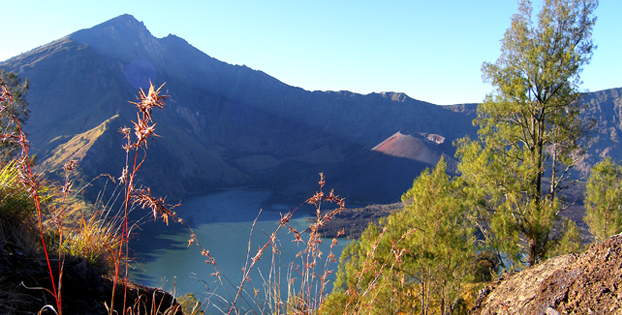 Mount Rinjani is an active volcano, located in West Nusa Tenggara (NTB) and is the second highest mountain in Indonesia after Mount Kerinci in Sumatra. There are lake Segara Anak, it has a natural hot spring, an eruption in the caldera has formed a new small cone known as the New Mount (Gunung Baru). Mount Rinjani is a very active volcano, There was a spate of activity from 1994 to 1995 which resulted in the further growth of the crater cone Gunung Baru, since renamed Gunung Barujari (Finger Mountain). On 27 April 2009 Gunung Barujari became active again with that activity continuing through to May 2009. The summit ascent routes were closed at that time as the eruptions intensified with plumes of smoke and ash as high as 8,000 m.

In the middle and at the bottom of the mountain is a fairly heavily forested with typical tropical species, Lombok is in the East of Wallace Line and some bird species with Australasian affinities are apparent. These include honey eaters, cockatoos and green hanging parrots, in addition to species whose heartland is to the West including tits, weavers and tailor-birds. Above the tree line though the slopes are barren and rugged scree slopes and volcanic rock. The views of the crater lake are quite breath-taking from the caldera rim, as is the sunrise. From the absolute peak you can see Bali to the west and Sumbawa to the east.

Mount Rinjani is the best climbed during the dry season (April-November). The trekking trails are generally closed during the rainy season. In recent years the early months of the ‘dry season’ have become more prone to rain and you should be prepared to encounter heavy rain and low visibility with slippery tracks underfoot at any time, particularly in the afternoon. It gets very cold on the mountain above 2,000 m and nears freezing at the summit. Warm clothing is an absolute must. in Rinjani Mountain you can see these several places are as follows:

How to get there

Most of the visitors come to Mount Rinjani through Senaru village located at an altitude of 600 m from the sea level, located on the north side of the mountain and close to the main beach resort areas in the West, it including in Senggigi. In addition to Senaru, you can also get there via Sembalun Lawang located at an altitude of 1.150 m from sea level, away closer to the mountain Rinjani, the village can be accessed from the north coast road.

Before doing the climb you have to manage your costs and permits, go to the park you will be charged Rp. 150,000 per person, the cost is divided as follows: 13% to the national park authority, 62% to climb Rinjani Eco tourism program and 25% for the preservation route travel etc.